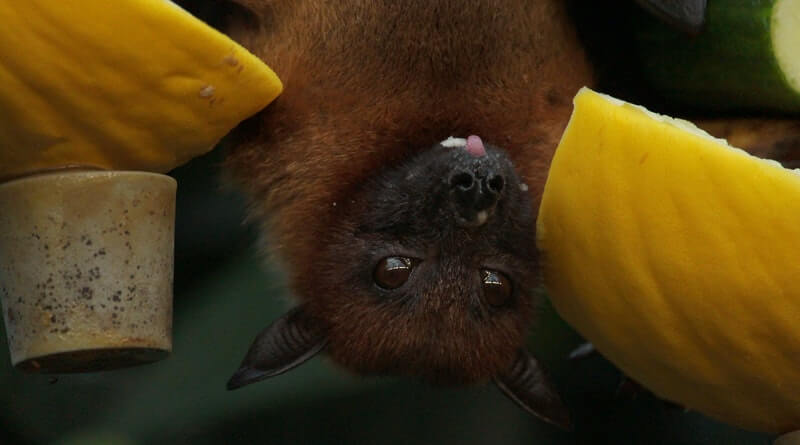 For most people, bats are misunderstood as nocturnal creatures that are beneficial to the environment.

If you’ve ever gone out at night and heard strange squeaking sounds above you, then it’s most likely bats flying in the air.

Here is the actual reason that bats tend to be noisy in the evening.

Much like any other nocturnal mammal that spends most of their time hunting for food at night, bats are no different than hedgehogs, raccoons, and owls when it comes to being champions of sleeping all day.

Their most active hours are at night after the sun goes down, which is when they wake and start looking for food to eat.

Bats are unique in their ability to locate insects flying in the air using echolocation noises.

These are loud chirps and squeaks that will bounce off of anything within their range.

What is even more impressive is that these high-pitch sounds will bounce off of anything in front of them and are picked up by their large ears. This allows a bat to focus their attention on how large that prey is and where it’s going. Much of the movement from a small insect is actually predicted by a bat that will fly directly into an insect’s path to catch it.

Since they have such bad eyesight, echolocation is also used to locate other bats.

They’ll make a variety of screeches, chirps, or song-like noises to determine if they’re approaching a male or female bat.

These noises also are very distinct when two females or two males are talking to each other. Since we cannot hear the high frequencies that bats are using most of the time, we only hear the sounds that are around 20 Hz.

This is why the sounds from a bat are somewhat confusing for people since we cannot hear the full range of noises that bats are making.

1) What does it mean when bats make noise?

Bats, like all other animals, produce different sounds for different purposes.

Mostly the noise made by bats cannot be heard by human ears.

They make noise three times higher than a human ear can hear.

Bats usually use their sounds for echolocation.

This is the method that enables them to find food in the dark. Bats have the ability to produce high-frequency sounds from their mouth as well as their nose.

This is very helpful for them to find their prey at night.

Bats produce ultrasonic sounds that are beyond human’s audible range.

So a human ear can’t hear a bat’s sound because they produce sounds that are much higher than a human ear’s audible range.

You cannot hear the ‘ping’ or ‘chirping’ or ‘squeaking’ sound of the bats because of their high frequency.

But if bats are hidden in your home, you will hear a scratching sound like mice make.

You can also hear the flapping of their wings when they try to move around.

If you hear a bat around your house, contact wildlife control as soon as possible. Only professionals at wildlife can remove them from your home safely and more efficiently.

4) What sounds do bats hate?

Bats hate ultrasonic sounds other than their sound. Bats use their sounds to echo locate. If they hear other sounds the same as theirs, they won’t be able to find their prey.

You will also be surprised to know that bats hate white noise.

They get disturbed and fly off.

White noise can be a good solution if you want bats to run away from your house.

5) Will keeping a light on keep bats away?

Bats usually do not like lights, especially brighter ones.

If you want to get rid of bats, you can keep a bright light at the entrance and exit points from where bats come inside your home.

You will never see a bat where floodlights are on. Bats will avoid coming to light as much as possible unless they are starving from hunger. Another reason to avoid lights may be predator avoidance.

6) What attracts bats to your house?

Bats prefer secluded and warm places to live in.

If they find your house a perfect place to live, they will look for dark spaces like pipes, ducts, or holes in the wall.

The hole or the crack in the wall may be so small that you may not even notice them. But bats may find it dark and warm, a perfect place for their living.

It is best to scare them off to get rid of bats.

You may place wind chimes around the house to scare the bats away.

You may also fix floodlights that may disturb bats. Bats like dark and warm places. They may feel unsafe in bright lights. So lights may be the best way to scare them off.

8) Do bats bite humans while sleeping?

There is a high possibility that bats bite humans while sleeping.

If you find a bat around you when you wake up, assume it has bitten you.

The bite of a bat is hard to notice, especially while you are sleeping. So it may have bitten you.

It would be best to get medical assistance as soon as you find out that a bat has bitten you.

9) Should I be afraid of bats?

You should be afraid of bats once you have noticed them around.

Bat, like many other animals, may contain diseases, including rabies. Once the symptoms of this disease start, it can be almost fatal.

Bat may bite you, and you may not even notice their bite. You should consult a doctor as soon as you notice that you have been in contact with a bat’s skin or saliva. Stay away from bats; they may harm you in many ways.

10) Are bats afraid of humans?

Bats are not scared of humans.

They live in the places where humans live. They may make their living spaces inside human houses. They sleep all day long and come out in the dark at night.

They may get disturbed and irritated by human noise and bright lights. But they are never afraid of humans.

They are smart enough to avoid humans.